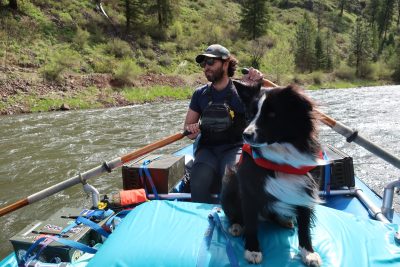 Jamie grew up in heart of Idaho, spending much of his youth pursuing his first passion: soccer. After playing at the collegiate level, he moved to London to coach for Arsenal’s community soccer program, which brought him coaching stints in Israel, the Philippines, and Greece. Once he finished his time abroad, he returned to McCall without an inkling of what his next step would be.

Then he found the river! Despite having grown up around the amazing rivers in Idaho, Jamie had never spent much time exploring the water. That all changed in 2016 when he began guiding in Hells Canyon and on the Lower Salmon. He immediately fell in love and tries his best to spend as much time as he can on the water. When Jamie isn’t floating down a river, you’ll find him skiing, reading, playing old school video games, and hiking with his two girls: Aspen the border collie and Nellie the golden retriever.

In your guiding career (on or off river), what has been your favorite “woohoo!” moment?

While not technically a guided trip, it did occur during my guiding career… which was rafting the Clarence River in New Zealand. Four of my friends and myself rented some boats from an outfitter in Clarence, hopped in a shuttle to the put in, and embarked on a 6 day, 120+ mile journey from source to sea. We were given 5 different map segments shoved in a 3 foot long pvc pipe. Each segment unfurled measured 2X3 feet. Trying to pull the correct map segment out in order see which camps were coming up or to identify any upcoming rapids was comical and often times we were way off the mark. The whole experience, right up to rafting into the ocean, was one big woohoo moment.

In your guiding career (on or off river), what has been your most memorable “uhoh!” moment?

My first year guiding was riddled with uhoh moments. The most memorable was asking my boat on my first commercially guided trip, whether they wanted to go big or not. They did. And we did. Total yard sale. Fortunately, one of the guests grabbed the beer cooler before it floated off to be someone else’s river booty.

What is your favorite dress-up theme?

I’m pretty partial to onesies, but can get down with almost any costume.

What intrigues you about working for Canyons?

The culture of community and family that Canyons embodies. I experienced a trip with them several years ago and walked away feeling like Canyons was a family and one that I wanted to be apart of!

What are three words that describe you?

What is your favorite thing about the Middle Fork or Main Salmon?

That free flowin livin. It’s pretty special these days to have such long stretches of water without dams or other man made impediments!

If you could be a river creature, which one and why?

Beaver. Because the beaver is nature’s water architect and is the only creature thus far that has figured out how to build dams that benefit the environment, not destroy it.

If you could bring anyone on a river trip, who would it be and why?

My grandma! She’s the best. I think her energy would match nicely with the rivers and she’d be a fun time!

What is one of your river rituals or superstitions?

If I scout a rapid and it looks intense, I have to throw some water in my face and put my sunglasses in my pfd.

What are your personal top 3 MUST HAVES on a river trip?

TOOTHBRUSH, camera, and a good attitude… and sunglasses

Where is your favorite groover spot?

That’s a tough one. I suppose out of the spots I’ve experienced thus far, Saddle Creek in Hells Canyon is up there for me. It’s feels like a 10 hour hike to the spot, but the view is worth it. I look forward to expanding my horizons this season and enjoying all the new groover spots.

What is the most important lesson the river has taught you so far?

So so many important lessons have been learned during my time on the water. It’s hard to break it down to the most important one, but if I were to take a stab it’d probably be somewhere along the lines of “be humble in success.” Every day the river throws new challenges, new moments at you. If you find yourself being successful, enjoy it, but don’t revel it. It can be ephemeral— one minute you’ve greased a line in a tough rapid, the next you’re pulling a swimmer out of the water. One meal you’ve grilled the most tender steak, the next you’re watching the Cornish game hens disappear behind a curtain of flames only to reappear as indistinguishable, black mounds. It’s important to have perspective and to work for success all the days and to be humble if you happen to find it.